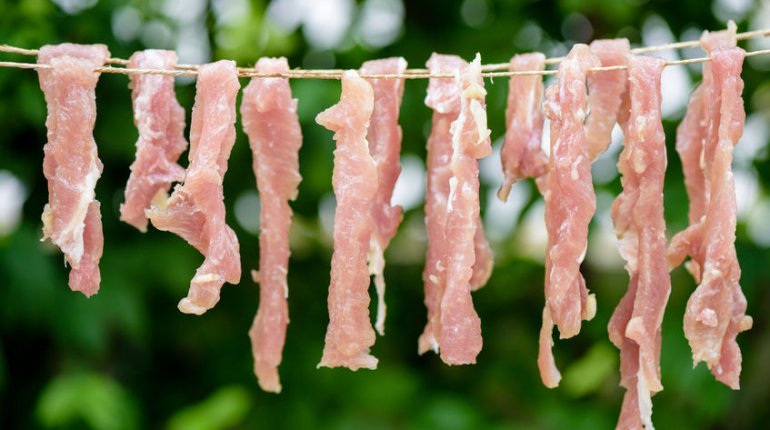 When you look at the ability of many tribal peoples to survive and thrive you often find that they possess a similar set of skills. All over the world and even throughout ancient history these skills have been essential to the survival of these groups.

One of the most important skills is meat preservation. Mastering the ability to extend shelf life on the most nutrient dense food source available has had massive implications on the human race. In fact, some theories suggest that the brain itself particularly the frontal lobe was growing  because of the consumption of meat. This theory is based on the dense nutrition in meat.

Here we’re looking a few options for meat preservation that are outside of the normal realm. You see I have a background in culinary arts and funny enough some of most posh preparations originated as preserving methods.

The French are masters of not only food preservation but creating unique methods that impart incredible flavor on that meat. Confit is not exception to that statement.

Essentially you are using the fat rendered from that animal or another fattier animal to submerge the meat in and cook it at a slow and delicate temperature. The cook time and temperature is the important part of this process. If you cook meat at too high a temperature in fat than you are merely deep fat frying the meat.

This slow and low process allows the meat to take on an incredible tender texture and a great flavor as well. The addition of seasonings and flavorings to the meat is an option as well. I like to salt meat for 24 hours prior to the confit processes.

Now it’s what happens after cooking that is amazing. You see when you are using animal fat to cook in it will harden at temperatures higher than your average temperature. Therefore, when your tender duck legs, deer shanks or other meat is finished cooking in its own fat it will harden and encapsulate the meat. This will allow the meat a home that is void of oxygen and protected from outside contamination. I read that duck confit was buried in the ground during fall and winter months only to be dug up later when food stuffs were running out.

Another powerful method of preserving food is the act of salt curing and air drying it. This process takes a serious time commitment especially if you are looking to do a big piece of meat. This is the method used in producing prosciutto.  I have made my own from a pork picnic and the air-drying process took every bit of 6 months. This process can be done in a cooler if you have one large enough but it’s much more exciting to have a hunk of meat wrapped in cheese cloth curing in your garage.

Timing is crucial in this process as well. No matter what you cure it will take a week covered in salt and rubbed with bourbon. If you are going to do a 6 month cure you want most of those months to be cold. This will limit mold growth. Check it every 2 months to slice off the mold growth and rewrap it in a fresh bunch of cheese cloth.

When you slice into this meat you may find it uncured in the center even after 6 months. Hang it for another month.

Jerky and smoking are great methods for meat preservation but I thought it would be fun to speak on some other less popular methods that frankly create world class food daily and double as serious preservation methods!

>> RECOMMENDED FOR YOU (open in new window)